Up close and personal with M J Akbar 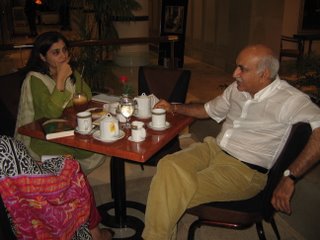 M J Akbar is a leading Indian journalist and author of several bestsellers. He is the founder and Editor-in-Chief of The Asian Age, India’s first multi-edition daily newspaper with a global perspective, and is also the Editor-in-Chief of the Deccan Chronicle, a Hyderabad-based news daily. He comes from Bihari Muslim ancestry. He was recently in Lahore for the book launching ceremony of his latest (seventh) book, Blood Brothers: A Family Saga.

We found him sitting in the lobby of the hotel he is staying at, having coffee with some guests. After bidding them farewell, he greeted us with a warm and hearty ‘hello’. Dressed casually in a white summer shirt and trousers, M J exuded an aura of coolness mixed with exuberance. After the formalities, we sat down for a chitchat session.

M J started to talk about his latest book with such passion that it was clearly visible how strongly he feels about it. He said that this book holds a special place in his heart, though this was not to say that his other books meant any less to him. “Every book is like maternity and to a mother every child is equally beautiful, though one may be more of a favourite than the others.” M J has a penchant for writing. When asked how he makes time for writing books with his extremely busy schedule, he says, “Time nikalta nahi, par nikaalana parrta hai yaar,” (There is no time, but I have to take time out). “It’s an addiction! I can’t get enough of it,” he says with a hearty chuckle. He said he gets plenty of time when travelling to keep writing. M J said he gets his inspiration from everyday experiences, and as he himself puts it, “No text is possible without context.” He wants to leave his books behind as a legacy, as a treasure of knowledge from which others would learn.

M J’s strength as a writer comes from two things. One is his strength of expression and the other is the strength of his craft. To put a story in a way that puts it in the exact light of what one wants to say is how a writer masters the art of storytelling. He believes that simplicity is the key to success for any writer. “Otherwise there a hundred different ways of saying things, you can make it dense and opaque or clear yet keeping it simple — depends on the way you tell the story.” He does not like to write in a difficult manner, with difficult words thrust in all over the page, making it difficult for the readers to grasp what the writer is saying. “It does a writer no good when the reader can’t go beyond certain pages. What’s the use of writing a book? You are not here to show off your vocabulary. A writer’s job is to capture the attention of the reader till the very end, not to lose the reader midway.”

“It is very cruel to ask a writer when he will write the next book,” quipped M J when queried about his future work. “You cannot ask a mother when she would give birth to her next child, only when the seed is impregnated inside her will she give birth — just like the seed of a new idea would impregnate my mind and the next book will follow.” Let’s wait and see how long it takes for M J to get impregnated (with an idea for his book of course!)

Talking about what keeps him ticking, he said, “It is just belief in myself. The worst kind of defeat is to be defeated by stupidity, to be defeated by evil, to be defeated by pettiness. I accept that I am just a pawn in the large game, but the moral framework of any human being should be such that he is never overwhelmed by events.” M J said that he is not afraid of confrontations. “Why enter life if you cannot confront things? Never be afraid of anything.”

About his brief foray into politics, M J says he wants to “experience everything in life”. Asked if he left politics because he got disillusioned, he said, “No, no, not at all. You can only be disillusioned if you have any illusions. And I don’t have any illusions.” He said that venturing into politics had been a good experience, “but the term ended too soon,” he laughingly tells us. “There are no regrets, but I am not cut out for politics. I don’t even know how to make money through politics!”

The secret of his success as a journalist is fearlessness and honesty. “The simplest way to deal with anything is to not want anything in return. If I go somewhere, I don’t want to be invited again. If they invite me again, that’s thir prerogative, but I never asked for it. I never try to embellish the truth, never put a spin on it. I write what I perceive to be right.”

When asked whether he is close to the religion Islam, he said, “Of course I am! I have full faith in my religion, but I do not impose my beliefs on others. And I certainly do not believe in the Islam preached by the maulvis.” He said that these mullahs are not ignorant, but want the people to remain in ignorance. “Ignorance is the breeding ground for the subjugation of women. These maulvis just want to maintain their power over women through this ignorance. They do not want anyone to introspect the religion, when in fact all the big scholars of Islam believe that it is always open for introspection. “It is not wrong to introspect, especially in religion. How can you follow something that you are not comfortable with, that logic defies? You should always be willing to introspect when you are in doubt.” He says that intention matters the most, not deeds. “If you have good intentions, don’t worry even if it brings about a bad result.” “Islam teaches you everything. There is a beautiful hadith: ‘The Quran is the speaking teacher, while the silent teacher is death’, so we must learn from the Quran.”

On the condition of Muslims around the world, he said, “Muslims are facing injustice in many cases, but at the same time they themselves are the perpetrators of many injustices. Some of the greatest injustices against Muslims are done by other Muslims.”

“I am comfortable with my age. But one should never sneer at time, for it passes fast,” when asked if he is afraid of old age. M J is 55 years old. He is very close to his family, especially his daughters.

People’s power is the solution to the Kashmir problem in his opinion. “In the end, the solution will not be found by the Pakistani or Indian governments, but by the people.” We wanted to talk a bit more about the political scenario of Pakistan, but M J made it clear he was here to talk about his book and not Pakistani politics.

M J Akbar believes in learning from moment to moment as living is learning. He comes across as a serious man, yet his sense of humour is highly visible during the whole conversation. M J truly lives the fearless way.

Popular posts from this blog

Abhinandan was not released under any pressure: Pakistan

March 02, 2019
We did not want to increase India’s grief, says Foreign Minister Qureshi

“We wanted to send a message to India. We don’t want to increase your grief, we don’t want to mistreat your citizens, we just want peace,” he told BBC Urdu in an interview.

The pilot was captured by Pakistani troops after his jet crashed on the other side of the border on Wednesday.

In a separate interview with BBC, the Foreign Minister said both countries were still in a very serious situation. “We still are... it isn’t over!... We are on high alert.” Both India and Pakistan have issues, “but how do we resolve these issues? By firing missiles at each other? No!” he said.

Mr. Qureshi said Pakistan never wanted a crisis and was ready to cooperate with India. “We said share evidence with us; we said we are willing to cooperate; we sa…
Read more

June 02, 2007
The Khilafat Movement initially started as an anti-British movement, but by its very nature was inherently an Islamic movement. Some Hindu leaders feared that it would take the shape of an anti-non-Muslim movement at some point – in other words, it would ultimately become an anti-Hindu movement. Their fears were not unfounded.

Before the Khilafat Movement completely collapsed, there were some incidents that strengthened the divide between the Hindus and the Muslims, especially the ‘Mopla riots’. The Moplas, a Muslim community settled in the Malabar area of Bombay Presidency, were ardent agitators during the Khilafat Movement. While revolting against the British, their rebellion took on an anti-Hindu tinge in 1921 due to the religious colour of the Khilafat message. A Khilafat kingdom was declared by the Moplas who then murdered the Hindus, looted them, raped their women, burned their homes, desecrated their temples and forcibly converted many Hindus to Islam. A prominent Hindu leader,…
Read more

The importance of knowledge

September 30, 2006
“India’s ‘cash-for-fatwas’ scandal broke out last weekend when a TV channel broadcast a sting operation that showed several Indian Muslim clerics allegedly taking, or demanding, bribes in return for issuing fatwas, or religious edicts.
The bribes, some of which were as low as $ 60, were offered by undercover reporters wearing hidden cameras over a period of six weeks. In return for the cash, the clerics appear to hand out fatwas written in Urdu, the language used by many Muslims in Pakistan and India, on subjects requested by the reporters.
Among the decrees issued by the fatwas: that Muslims are not allowed to use credit cards, double beds, or camera-equipped cell phones, and should not act in films, donate their organs, or teach their children English. One cleric issued a fatwa against watching TV; another issued a fatwa in support of watching TV” — ‘India’s Cash-for-Fatwa Scandal’, Aravind Adiga, Time Magazine, September 21, 2006.

After reading this news, I wondered which fatwas shoul…
Read more